Main > Blog > Are Those with BIGGER Brains SMARTER

Are Those with BIGGER Brains SMARTER

Yoshith Perera
If size had anything to do with it, I do know of a few big headed individuals that would execute better situational judgement. If larger brain size did result in higher intelligence, whales and elephants would already dominant the animal kingdom vs. coming to the brink of extinction as a result of whaling and poaching by human beings.

Listening to an engaging Ted Talk by neuroscientist Suzana Herculano-Houzel about human brains, I was found out that the human brains were quite similar to primate brains. She explains how our brains house an exceptional 86 billion neurons (constitutional cells or building blocks of brain tissue) with 16 billion of them contained in the cerebral cortex. Thanks to this cortex or outer covering, we are capable of complex cognitive functioning. To check the video out, utilize the following LINK.

Upon this blogger’s search of the World Wide Web, he came across what is known as the encephalization quotient. It is a ratio of actual brain mass over predicted brain mass for an animal’s size. The predicted brain mass is based on the assumption that larger animals need slightly less brain compared to smaller animals. It is by this metric that human beings come on top [1] ! 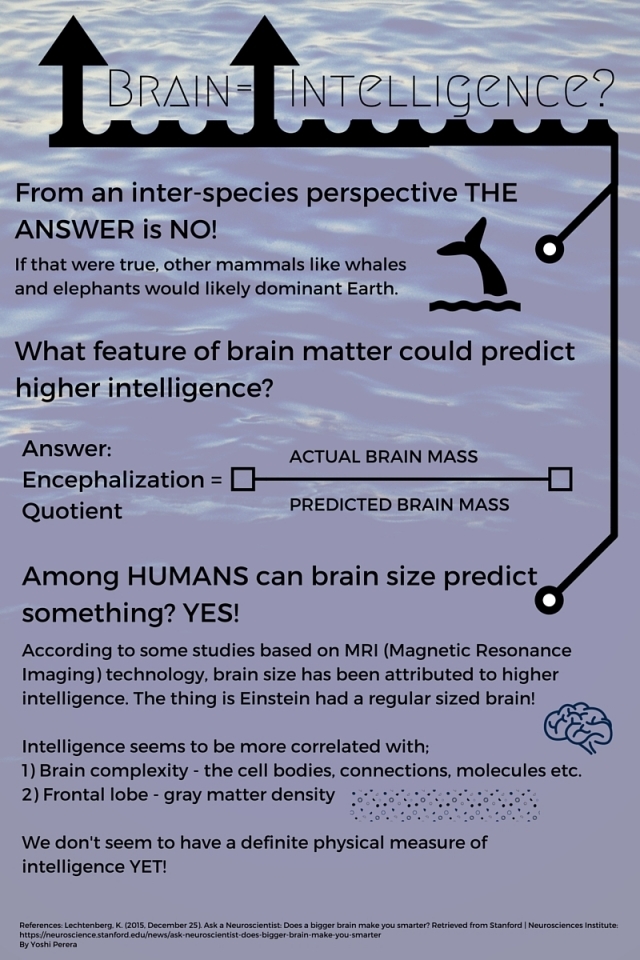 Forget different species and consider only humans for an instance. Based on research findings on several Magnetic Resonance Imaging (MRI) studies looking at brain matter, it has been found that large brains may correlate to greater intelligence. However if this were true, Albert Einstein would have been just like the majority with a mean IQ (Intelligence Quotient). Although specific genes have also been identified as influencers of intelligence, many factors are thought to define human intelligence.

The fact is that there are other physical attributes that govern one’s intelligence like molecular complexity of the brain. Factors such as grey matter content, the number and density of neural connections or synapses all contribute to the brain’s computational capacity. The info-graphic shown below summarizes this article. As we continue to unlock the secrets of the human brain, it is quite certain that there is a complex causation of intelligence.
Yoshith Perera January 12, 2016
Share
Tweet
Our readers also like:
NLP: Where to Learn About it in the GTA Why Meditate: Understanding the Value of Mindfulness