Christine Kavanagh
When my daughter, Ellie first did "tummy-time" at 3 months old, she looked up at me and I noticed she had “googly eyes.” What I mean is that she would only look up with one eye while her other eye would remain at an even level. The eyes were not aligned when any upward movement was tried so it looked as if the "good eye" was wandering. This is called Strabismus or Brown’s Syndrome. For Ellie, it's characteristic is the limitation of the elevation of her right eye. This is due to a malfunction of her upper oblique tendon which prevents her eye from rotating up. As Ellie's Ophthalmologist at Toronto's Sick Kids hospital described to us, “the tendon above her eye is tight like a steel cable when all tendons in the eye should respond like elastic bands.” 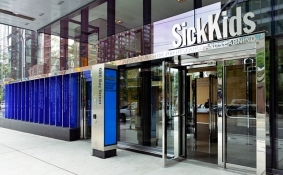 Interestingly, this upper tendon is the least important of all the tendons around the eye because Ellie can adjust her head in order to look up; peripheral and downward vision are much more important for anyone. However, when she did look up with one eye remaining straight, two separate images were then sent to the brain and we noticed certain activities and movements were challenging for her; such as, tripping, bumping into people or objects, and resisting school work that included transcribing from blackboard to paper.

Her surgeon, Dr Kraft is a specialized pediatric Ophtalmologist. We were extremely fortunate to have access to his skill and for Sick Kids Hospital's extensive services. Ellie became a patient at 8 months old. Appointments may last several hours; including Occupational Therapy, drops and then her appointment with Dr Kraft. She always enjoys the videos and games which are a part of her consult. Sick Kids staff have patience, humour and use imagination to get the best response from their little patient. As parents, we decided that the best hope for Ellie would be to have surgery with the intention of correcting the weak eye and bringing it in line with the good eye. Glasses and patching would not work for her and we knew that as time went on she would lose her vision in her weak eye because her brain would ignore the messages sent by it as the good eye would overcompensate. As a young patient, Ellie is thankful to know that when she goes in for surgery she will go to sleep by way of a bubble gum flavoured gas rather than a needle. She is happy to be allowed to take her favourite stuffy and know that she can pick a parent to be with her for the first few minutes in the operation room. Sick Kids understands the stress in which parents are under during a child's surgery and the staff are very calming and helpful through pre-op visits and waits.

After five years of monitoring her eye and performing two surgeries we are pleased to report that her eyes are now very well aligned. Ellie will continue to strengthen her weak eye simply by using it over time. We have noticed, physically that she is more aware of her depth perception and that she struggles less with transcription. She does not have that "goggly" look as she did for the first few years of her life. She is now able to rotate her eyes as most people do and at 6 years old she can roll her eyes when frustrated and this is good to see.
Christine Kavanagh November 23, 2015
Share
Tweet

Categories
All Articles Myth vs Facts Health and Wellness Toronto Ontario Hamilton Ottawa London Alberta Edmonton Calgary
Contribute to VisitDoctor.ca
Readers' Picks
Medical Tests New Immigrants to Canada Should Be Aware Of
Haadi Hafeez
Moving to a new country can be a long and arduous ordeal; application processes, background checks, and medical tests...
Infographic: The Doctor Shortage in Ontario
VisitDoctor.ca Team
The team at VisitDoctor.ca has compiled a new infographic highlighting the current statistics of how severe the...
Methods of Birth Control in Ontario
Monique Zizzo
There are countless situations where an unplanned pregnancy would be a major problem rather than a pleasant surprise,...
The Future of Regenerative Medicine in Ontario
Monique Zizzo
In January 2016, Prime Minister Justin Trudeau announced that $20 million from the Advanced Manufacturing Fund will be...
Natural VS Conventional Medication
Haadi Hafeez
In an ideal world people would live long lives, never having to deal with illness or disease. We would eat naturally...
Child Ophthalmology at Toronto Sick Kids: A Personal Experience
Christine Kavanagh
Toronto Sick Kids Hospital is internationally renowned for their advancements in child healthcare. It provides specific...
Canadian View on Physician-Assisted Death
Vivian L.
Today's Canadians want control over all aspects of their own lives, including the choice of whether to live or die....
Rising E-Cigarette Trend in Toronto, a Safer Alternative?
Haadi Hafeez
Walking down the streets of Toronto you may be noticing an increasing trend that has been sweeping the globe, men and...